Hoi An Ancient Town Guide: Everything You Need to Know 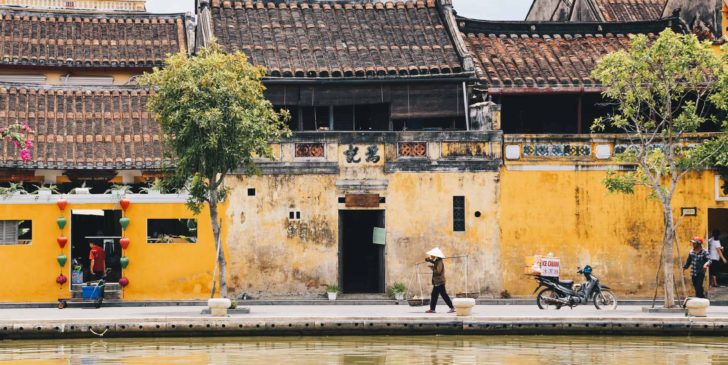 Hoi An Ancient Town Guide: Everything You Need to Know

It’s easy to be drawn under Hoi An’s spell with its peaceful way of life and beautiful surroundings, but this city is more than just a pretty face. Quite a lot of history lives here, too, and if you’re interested in digging into it, one of the best things you can do is purchase an entrance ticket into Hoi An’s Ancient Town and do a little exploring.

Where to Buy Ancient Town Tickets + How They Work

Tickets into the Ancient Town of Hoi An cost 120,000 VND (around $5 USD, children under 16 are free) and can be purchased from official ticket booths located at most major entrances into town. The booth at the intersection of Tran Phu and Le Loi is a particularly convenient spot to buy tickets, as is the booth on Tran Phu and Bach Dang near the Japanese Bridge.

Supposedly, a ticket is required just to walk the streets of the Ancient Town, but it’s unlikely you’ll be asked to show it unless you’re visiting one of the historic houses, temples, or heritage museums showcasing the city’s rich history. There are 22 historical sights open to the public and a single ticket will allow you entrance into five of them. (If you want to see more, you’ll need to buy additional tickets.)

Your ticket may state that it’s only good for 24 hours, but as of writing, this isn’t enforced. You can use one ticket for the entire duration of your trip, assuming you don’t want to go in more than five sights. Be sure to grab a free map when you purchase your ticket, and always keep your ticket on you just in case you need it.

Deciding which historical sights are worthy of your five ticket stubs can be a bit of a task. There isn’t a lot of information provided about each location on the map you’re given, and so it’s a bit of a guessing game as to which places you might enjoy most. General consensus, however, is that the museums aren’t currently all that impressive, and you’re better off using your ticket stubs to visit a few of the old houses, temples, and pagodas instead.

With this in mind, we visited six different historical sights in the Ancient Town (one didn’t require a ticket) and we weren’t disappointed with a single one of our choices. If you’re feeling stumped about where to use your ticket in Hoi An’s Ancient Town, you can’t go wrong with the following locations.

Historic Sights and Temples to Visit in the Ancient Town

Built in 1885 by Chinese merchants from the Guangdong province, Quang Trieu Cantonese Assembly Hall was designed as a place where Chinese fishermen and traders could come together to exchange goods or simply relax and socialize for a while before returning to work. Quang Trieu (like the other assembly halls in Hoi An) also contained an alter room where Cantonese traders could worship their gods and goddesses.

Finding Quang Trieu isn’t difficult – you can’t miss the colorful grand entrance gate dominating the sidewalk on this portion of Tran Phu street. Once inside, you’ll want to look out for the famous dragon fountain made of broken bits of pottery, as well as several statues depicting scenes from Cantonese operas.

In the rooms off to the side of the main assembly hall, you can view the ancestral tablets of some of the oldest generations of Chinese merchants in Hoi An. The large gardens behind the assembly hall are a quiet, tranquil place to have a wander as well.

Read More: 7 Things to Do on Your First Trip to Hoi An + Travel Tips

Located on the same street as Quang Trieu, Phuc Kien Fujian Assembly Hall is the largest and most famous of the assembly halls in Hoi An’s Ancient Town.

Originally the site of a Vietnamese pagoda dedicated to Buddha, the land was later sold in the mid-1700s to the largest group of Chinese traders in Hoi An, the Fujian, and Phuc Kien Fujian Assembly Hall was built in its place. Phuc Kien honors three different goddesses, all with extraordinary talents in relation to the sea, from being able to spot ships from thousands of miles away to protecting fishermen out at sea.

With its spacious courtyards and gardens and immaculate attention to detail in each room of the assembly hall, Phuc Kien is definitely a historic sight you won’t want to skip. The lush greenery, quiet setting, and gentle aroma of burning incense make for a relaxing visit, and there are countless opportunities for interesting photos here as well. The assembly hall features an impressive alter room and you’ll find exquisite artwork and statues, many with an obvious nautical theme, throughout the whole complex.

One of the most well-preserved homes in the Ancient Town, the Old House of Tan Ky has been in the same family for seven generations. Built in the 18th century when Hoi An was still a thriving commercial port town, the Old House of Tan Ky is a beautiful representation of all the different groups of people who resided in the city at that time. Chinese, Japanese, and Vietnamese influences can be seen in everything from the architecture of the home to the design details in the furniture.

Although a little cramped and quite dark inside (making pictures somewhat difficult), the Old House of Tan Ky is a great sight to visit if you’re interested in seeing and hearing about how wealthy people lived in Hoi An back when the town was at its peak. A guided tour of the house is included with your ticket, as is a cup of tea while you listen to an introduction to the house’s history as told by one of the family members of the home.

Find the Old House of Tan Ky on a map: 101 Nguyen Thai Học, Phuong Minh An, Hoi An

Connected and thus considered a single sight as far as ticket stubs go, Quan Cong Temple and Quan Am Pagoda are both relatively small places of worship, especially in comparison to the size of the first two assembly halls on this list.

Quan Cong Temple was built in 1653 in honor of Quan Cong, a prominent Chinese general known for his courage, loyalty, and integrity. His likeness has been preserved here in statue-form, and if you make an offering to him, the same person who takes your ticket will ring a bronze bell for you. The adjoining Quan Am Pagoda, dedicated to the Chinese goddess of mercy and compassion, can be accessed by following the passage behind the temple.

Because we wanted to see as many different types of places in the Ancient Town as we could on a single ticket, we included these two sights on our agenda. We enjoyed walking through the silent temple, admiring the water garden and bonsai trees, as well as the understated beauty of the pagoda. However, if you’re looking to visit the biggest or most ornate sights in Hoi An, you might ought to choose something else.

Read More: Lasenta Boutique Hotel: A Scenic Place to Stay in Hoi An

Though Duc An House in its current state wasn’t built until 1850, the same family has lived on this property for over 400 years. The current owners still live here, and if you’re lucky, they might even come out to tell stories of the house’s past during your visit.

Once a successful bookshop selling both Chinese and Vietnamese books, Duc An House also became a traditional Chinese medicine dispensary in the 20th century. Evidence of this can still be seen in the walls of drawers at the front of the house where the medicines used to be stocked.

Duc An House was my favorite of the two houses we visited. Full of antique furniture and interesting artwork and photographs, we spent almost as much time exploring all the nooks and crannies of this house as we did the assembly halls. The beautiful garden at the back of the house is a bonus, as is the fact that no souvenir vendors are allowed to set up inside, making it feel more like you’re actually visiting someone’s home.

These days, the Japanese Bridge has become somewhat of an icon in Hoi An, but back when it was built in the early 17th century, the bridge simply served as a way for the Japanese community who lived on the other side of the stream to reach the Chinese quarter.

The Japanese Bridge has been restored many times over the years, but has mostly stayed true to the original whose simple design stands in contrast to the generously embellished Chinese temples nearby. Within the bridge’s covered pathway is a small temple honoring Tran Vo Bac De, the god of weather.

Visiting the Japanese Bridge won’t require you to use one of your ticket stubs…unless you want to cross it. Bizarrely, crossing the bridge will count as one of your five sights, so I suggest simply coming to see it, but saving your ticket stubs for the other locations on this list where it makes sense to charge an entrance fee.

Nighttime is the best time to take photos here, but definitely visit during the day as well when you can watch all the activity that happens around the bridge. It’s definitely one of the most popular attractions in Hoi An.

Find the Japanese Bridge on a map: Nguyen Thị Minh Khai, Phuong Minh An, Hoi An

Other Things to Do in Hoi An’s Ancient Town

This part of town isn’t just full of ancient sights. There’s so much more to do and see here after you’ve had your fill of history.

First off, you must visit the Central Market. It’s the biggest market in Hoi An, and even if you don’t plan on purchasing anything, it’s an experience just to watch all the bustling business that happens here.
While you’re unlikely to find anything sold in the Night Market that you couldn’t also buy during the day, the real reason for coming to this one is the lanterns. They’re beautiful during the day, but nothing short of magical at night casting their glow over the streets and hanging by the hundreds in shops.
Hoi An has become somewhat of a foodie destination, so you’ll find no shortage of trendy and delicious cafes to eat at. For a list of foods to try and where to eat them, check out our Hoi An food guide!
If it’s good deals you’re after, you’ll enjoy shopping in Hoi An. Besides the usual clothing, souvenirs, and handicrafts you can find everywhere in Vietnam, Hoi An is also well-known for their silk products and tailor-made clothes. If you’re looking to have a dress or suit made, Ancient Town is the place to go.
Many of the streets in the Ancient Town are car-free zones, making bicycling here far more pleasant than on the roads elsewhere in Hoi An. If your hotel doesn’t offer bicycle rental, there are shops in town which offer rentals for just $1/day.
And finally, you’d be hard-pressed to find a more photogenic city in Vietnam than this one. If you’re into photography, you’ll be one happy camper walking through the streets of Ancient Town as there’s something beautiful to photograph nearly every step of the way!

Read More: Snapshots of Hoi An: A Photo Series

Did you enjoy this article or find it helpful? Save it for later on Pinterest!

Read more about this at thewanderblogger.com

12 thoughts on “Hoi An Ancient Town Guide: Everything You Need to Know”